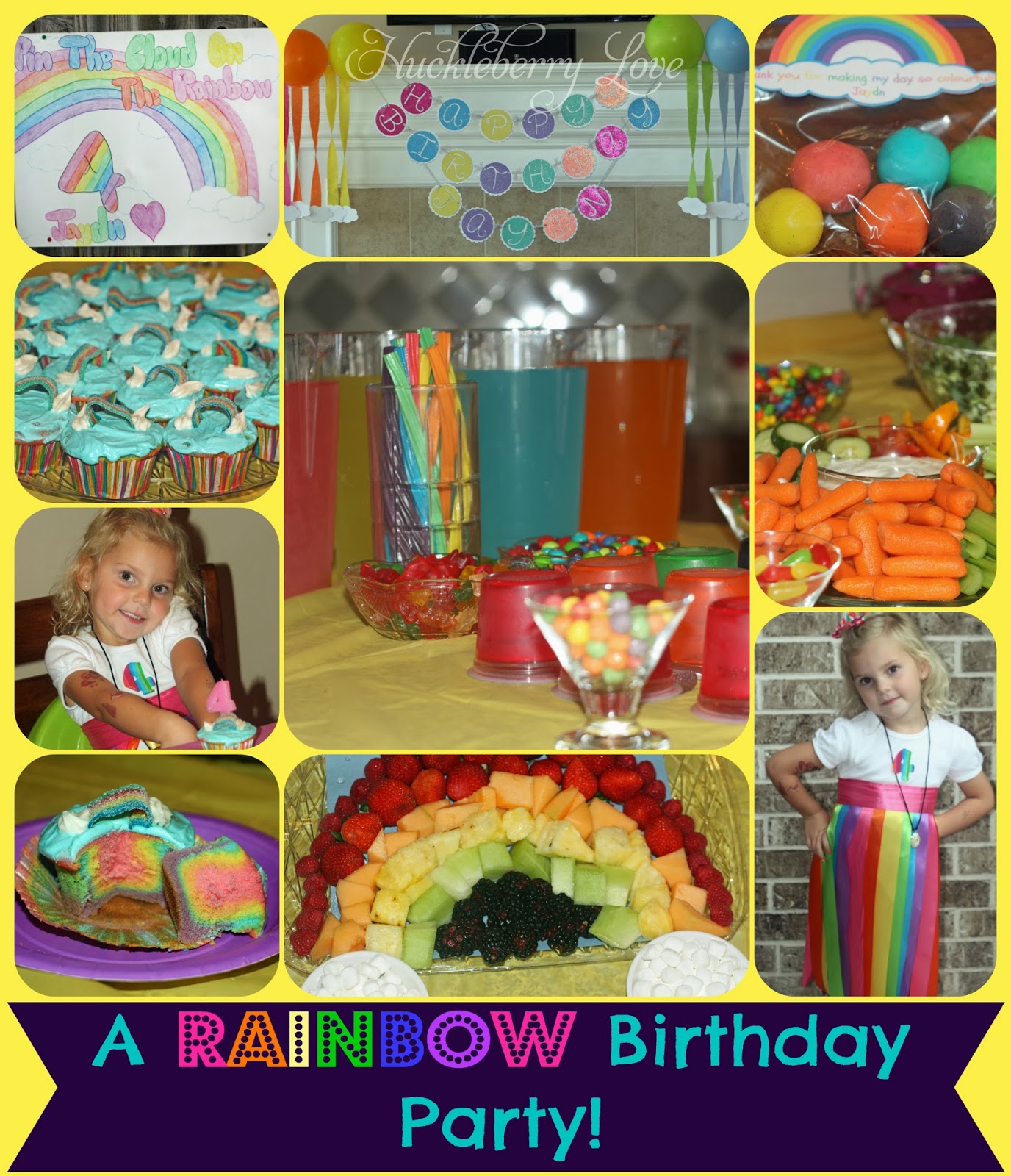 Last week I posted about my little ones Minnie Mouse Birthday Party. Hers was in December, but back in October my oldest also had a birthday party. I figured now that the holidays are over and things have settled a bit, it was a good time to share all of the fun details.

Now, as a 'grown-up', mature 4 year old, she didn't want a character themed party, she wanted a Rainbow party! When she broached me with this idea, I was actually pretty excited to start planning. A rainbow theme allows for a lot of freedom. so doing this party was a ton of fun.

It turned out amazingly well and Jaydn was blown away by all of the rainbow fun that was incorporated!

To get things started, we needed decorations. So, out I went to get a bunch of different coloured streamers and matching balloons. I also cut out some cloud shapes to randomly use with the streamers. I strung them up almost everywhere I could think of; in the living room, foyer and kitchen (basically everywhere the party-goers would be). I loved the colour and festivity that was everywhere and after the party was over it was hard to take it down, lol.


Along with the decorations for the party, I included a home made banner. This is something that I have done since Miss Jaydn's first birthday party and is something I really enjoy doing. For this banner I got sparkly card stock in a few fun colours and with my Silhouette cut out her banner and tied it all together with some white sparkly tulle. I love how it turned out and the balloon, streamer and cloud combo was the perfect addition.

Along with making her a birthday banner, I decided that I wanted to make her a birthday dress as well. For all of her previous birthdays I have made her a tutu, but I figured for the big 4 she needed something a little more grown-up. :) {Keep your eyes peeled over the next few weeks for the tutorial of how I made it.}


Now besides decorations and a birthday outfit, food rates very highly as a must for a great party. My goal for the food table was bright, colourful food and candy displays. We had a vibrant veggie tray, rainbow goldish, tri-colour tortilla chips and queso, 4 different flavours of jello, macaroni salad and smokies (because they're rainbow shaped) and of course a rainbow fruit tray. At each end of the fruit rainbow, I had a yogurt dip, topped with mini marshmallows to look like clouds. :) 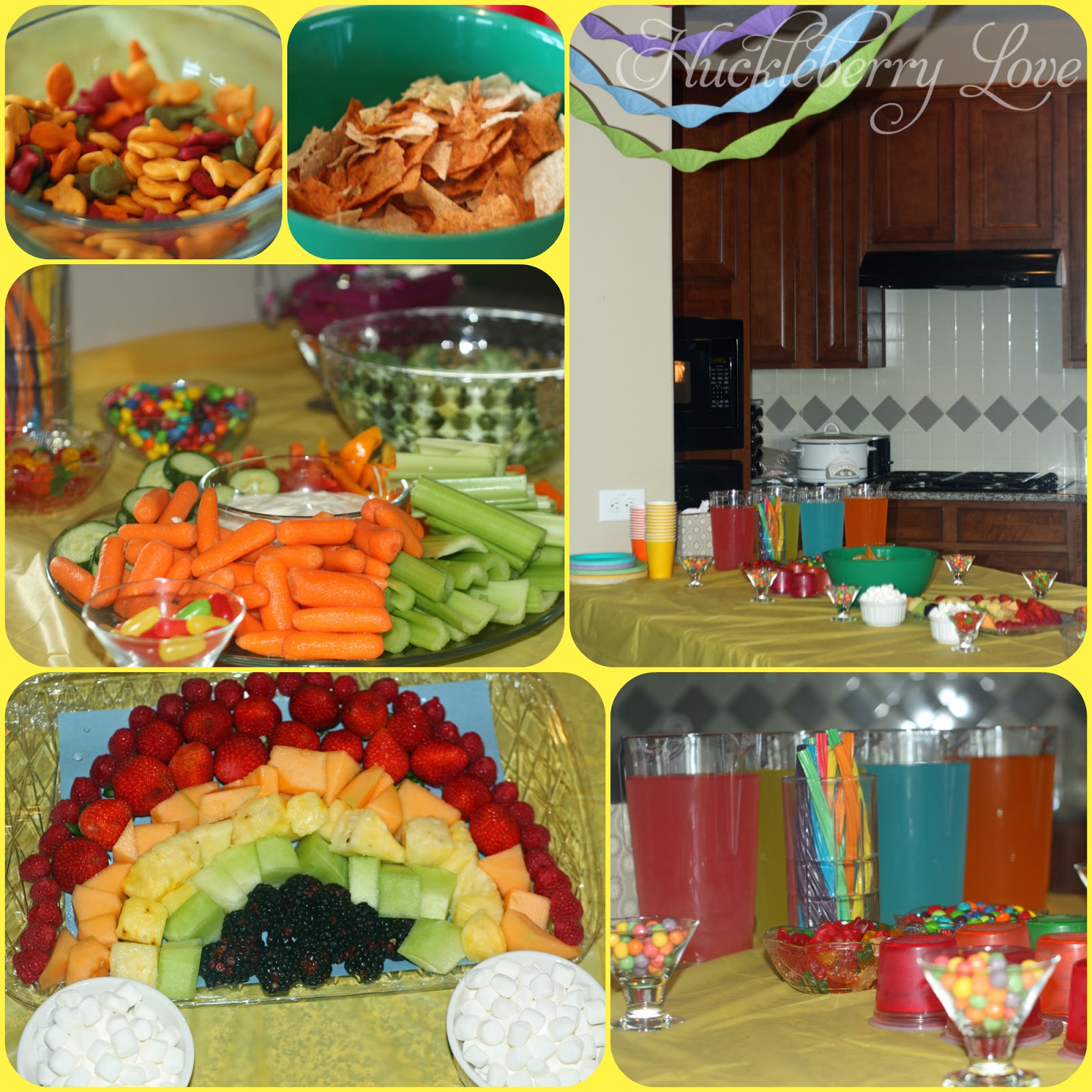 Another important food item required at a birthday party is birthday cake, or in this case birthday cupcakes. I had to stick with the rainbow theme so after icing the cupcakes I used ribbon candy and a bit more icing at each end of the rainbow. I also thought I'd take the cupcakes one step further by making them rainbow inside as well. They turned out so well, even I was surprised when I cut them open and they were so colourful! I'll share how I made them in the next few weeks as well. :) 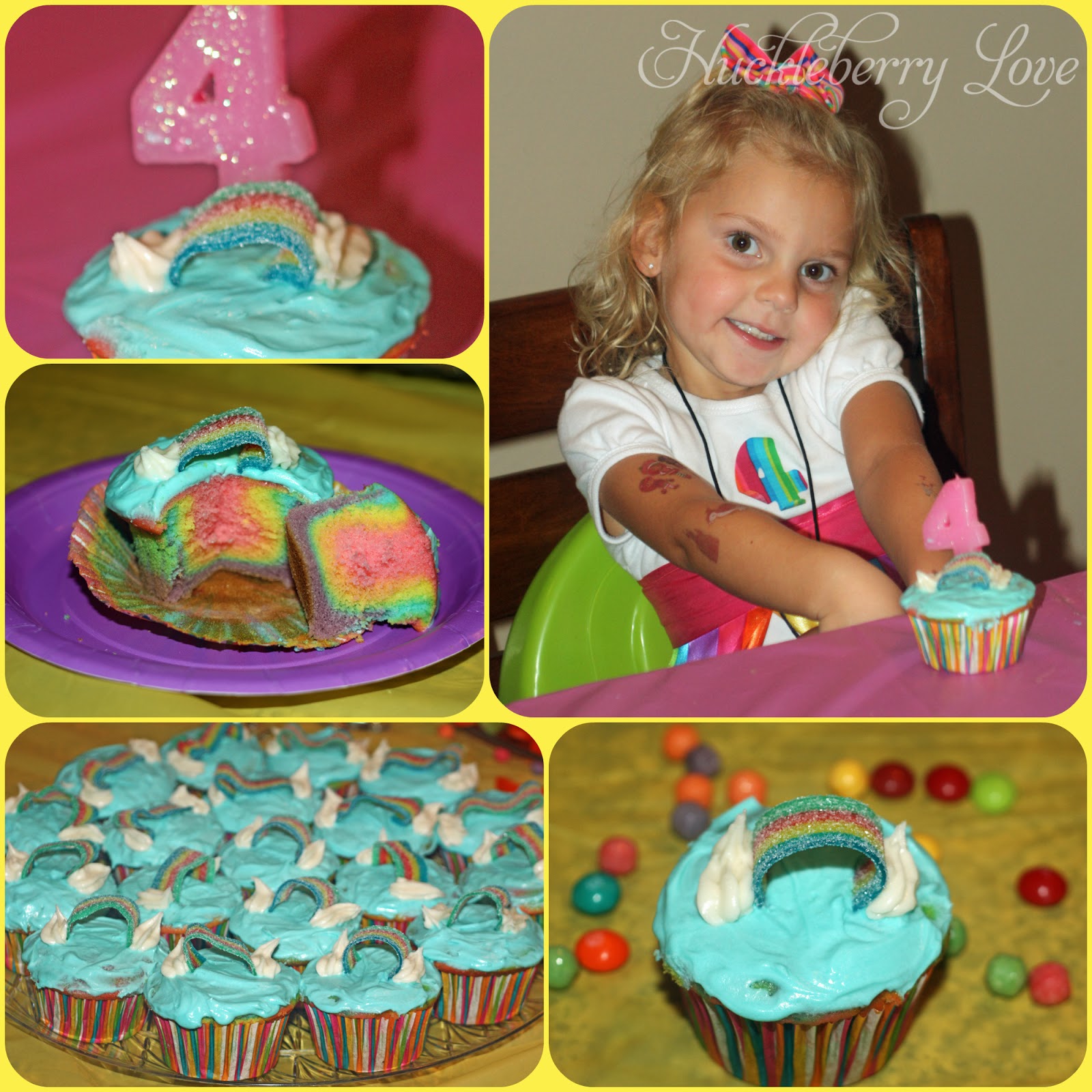 As far as keeping our little guests entertained, we had a few, fun rainbow themed activities for them to do. We had a homemade pinata (I will also share how I made this in a future post), 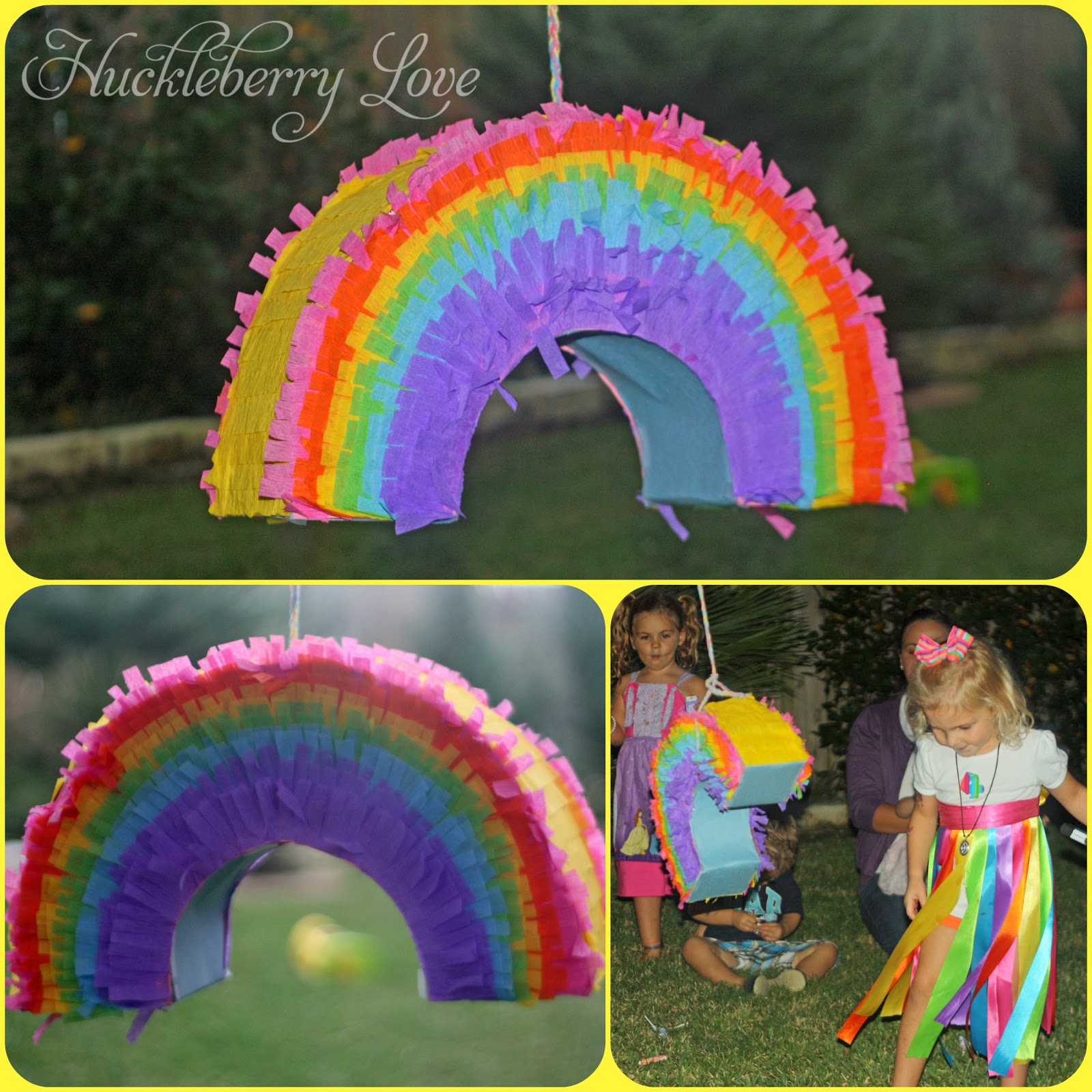 a 'Pin the Cloud on the Rainbow' game,


and a fun 'make a rainbow out of Froot Loops' craft.


When the kiddos weren't participating in one of the activities, they were enjoying each others company and the beautiful October weather. 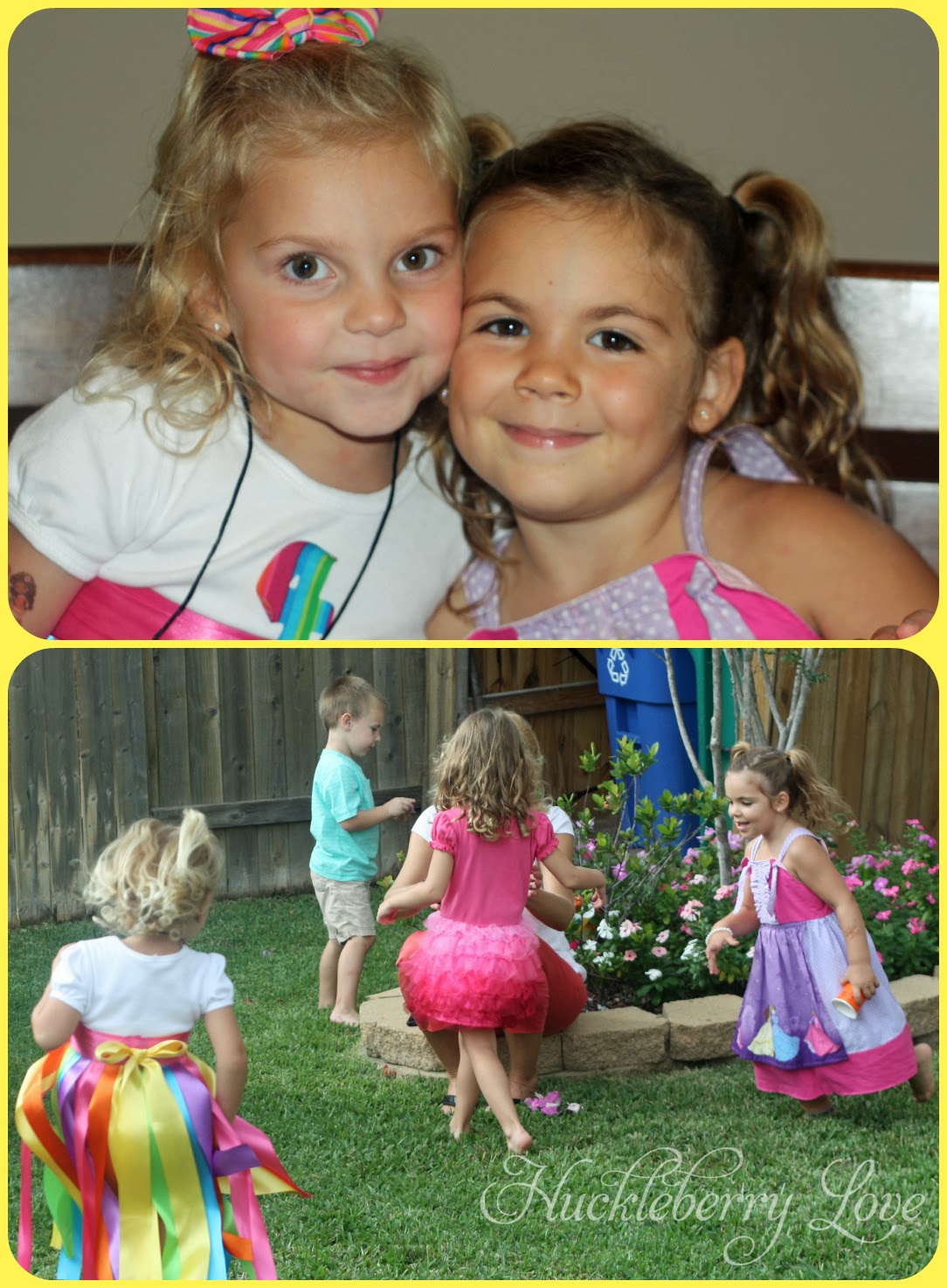 And when the partying was finally done, the guests all got to take home some homemade sparkle dough as a favour. (I'll share how to make your own in the near future).


Overall, the party was a huge success and everyone had a great time! I loved every minute of the party and all of the planning and crafting that led up to it. But most importantly, the special Birthday Girl had a blast and that's what makes it all worthwhile! :)


Birthday parties are my favourite thing to plan and organize, have you thrown any parties lately?

Linking Up With These Fantastic Parties:
Family Home and Life, Fluster Buster, Love, Pasta and a Tool Belt, My Rays of Sunshine, All She Cooks, This Silly Girl's Life, The Pin Junkie, Craft Dictator,
Mostly Homemade Mom
The Life of Jennifer Dawn
The Blissful Bee
Made to be a Momma
Polkadots on Parade