A couple of weeks ago we celebrated my daughter's fourth birthday with a Friday playdate party. We invited over the mom's group that we are in, along with a few other friends. In the beginning, I wanted the birthday party to be a small, simple party...maybe just cupcakes and a few snacks. Nothing too fancy.

But then she announced that she wanted a mermaid birthday party. And I just couldn't control these urges to make everything pink and blue and ocean-themed. After all, my design aesthetic is definitely beach inspired so I had a ton of decor just laying around, waiting to be used. It would have been a shame for it to go to waste, right? 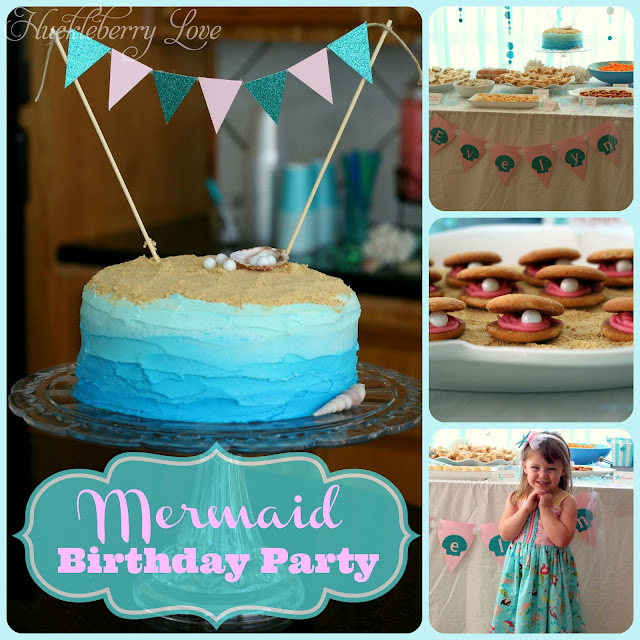 After looking through (what else?) Pinterest, I came up with a color scheme of various hues of blue with a small splash of light pink. I love how the party turned out! Very underwater inspired but still girly. 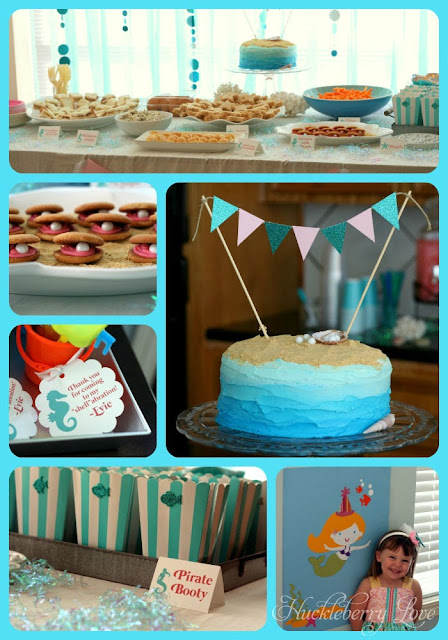 I let my daughter pick out the invites that she liked best and she settled on these adorable invitations from Etsy {she may have picked out the invite but the corny pun on the invite is all me}. We then printed them out at a local copy center.


For the food, I tried to keep it as simple as possible but still kept with the theme as much as possible. We had peanut butter and jelly(fish) sandwiches for the kids and chicken salad for the adults. 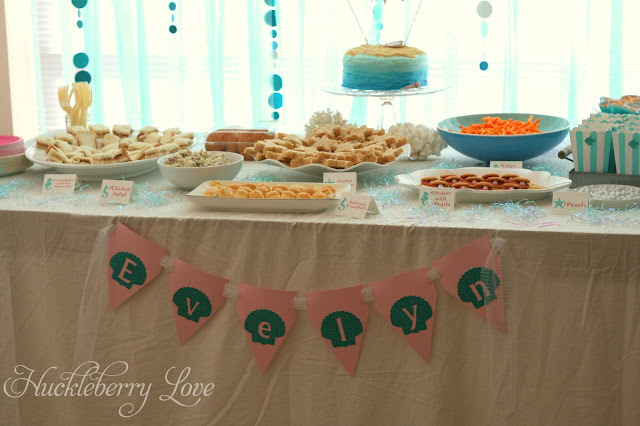 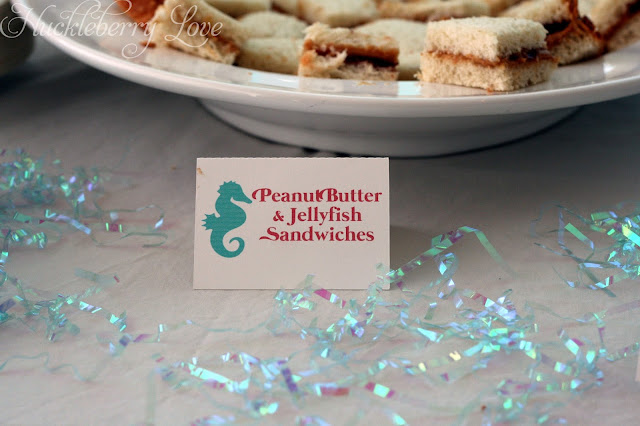 I decorated behind the food table by alternating between two different shades of blue streamers. I just let them hang down, which turned out really neat because when the air conditioner came on (which was almost constantly because it's August in Texas and I was almost 9 months pregnant...sorry, electricity bill) they rippled and looked a lot like water. 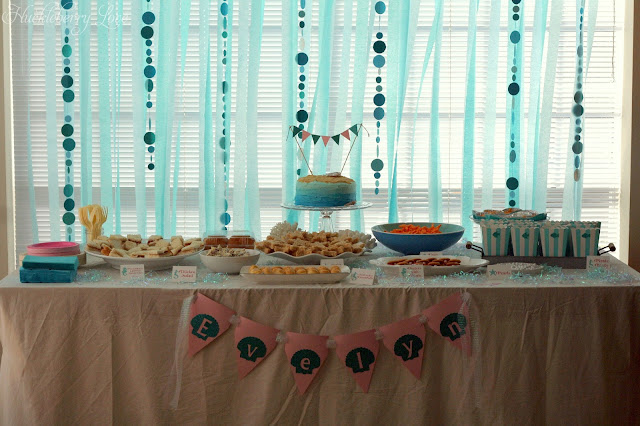 I also made some really fun circle garlands. I used my Silhouette and about five different shades of blue cardstock {even a glittered one!} and cut out as many 2 inch and 1 inch circles as I could fit on the page. Once cut out, I just ran them through the sewing machine and voilà! Circle garlands! I couldn't believe how easy they were and they looked exactly like bubbles. Super cute! 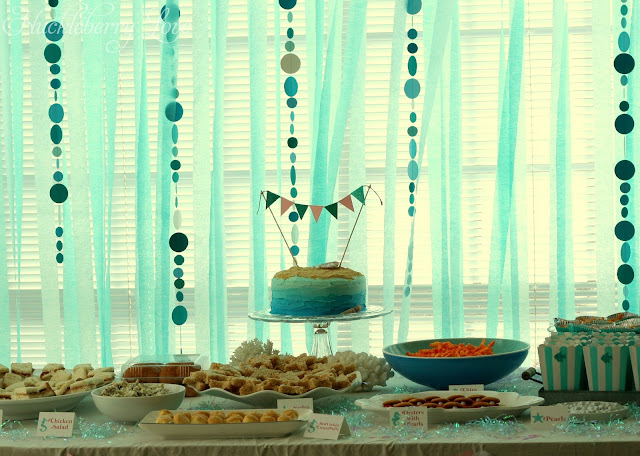 My favorite thing that we made {other than the cake, of course!} were these adorable clams with pearl cookies.  I got the idea from Living Well Spending Less. She threw a fabulous beachy mermaid party for her daughter and I used a ton of her brilliant ideas for my party. She is a party genius! 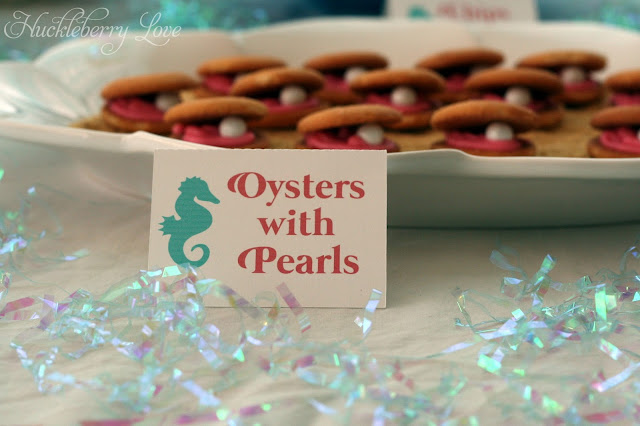 These little cookies were a hit with all the kids and they were so fast to make. I simply bought a little tube of pink decorator icing and, using an icing tip that I already had, squeezed a small amount on the bottom of a large vanilla wafer. Then I took a white sixlet (which I found at Party City) and stuck it on there and then topped it with another wafer. Easy, peasy and they look just like little oysters, don't you think? My daughter couldn't get over how cute they were. 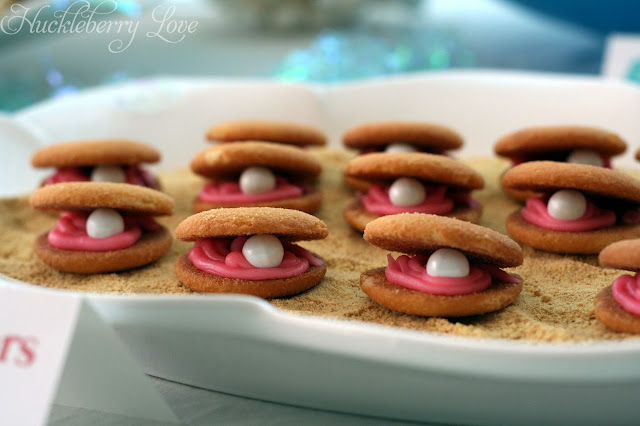 I laid them out on some graham cracker crumbs that I had in my pantry, so it looked like they were on sand. 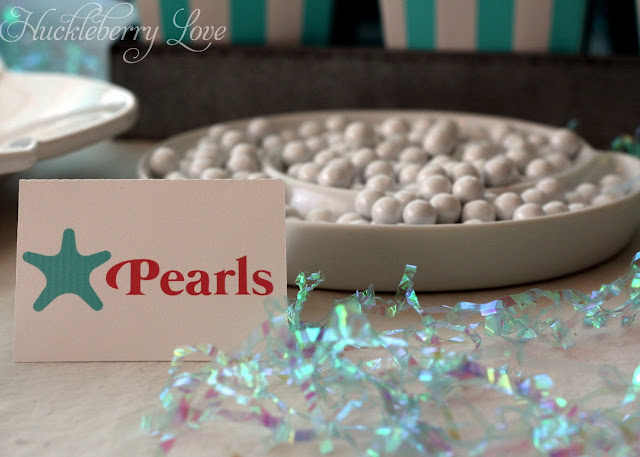 I put out the remaining sixlets for everyone to munch on. 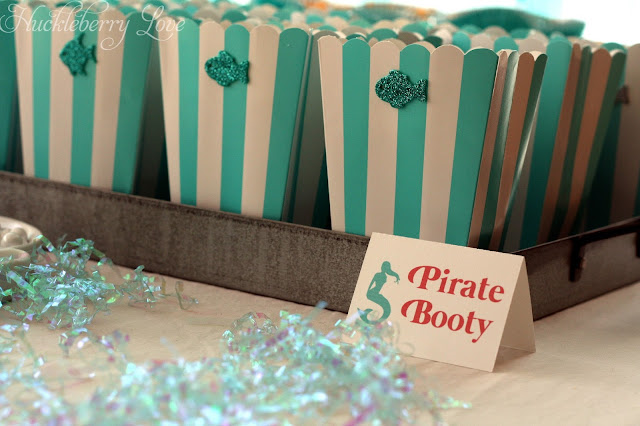 To make serving easier, I decided to do individual little containers for the Pirate Booty and the goldfish. I found the blue striped containers at Party City (they have them in a wide range of colors) and put some glitter stickers on the front of them. The kids really liked having their own little "popcorn" holder. 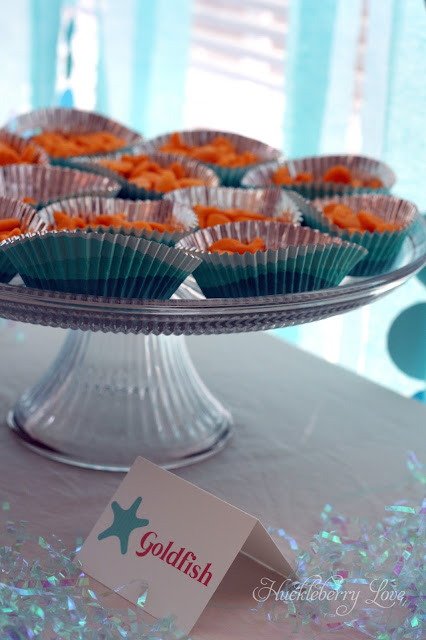 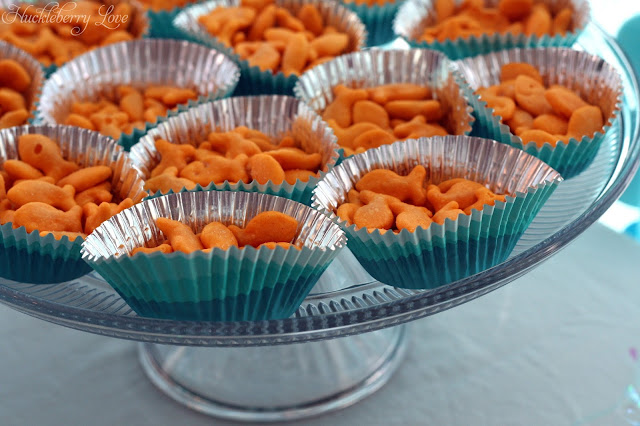 For the goldfish, I just put a small handful into cupcake liners that I found at JoAnn's. Nice and simple! 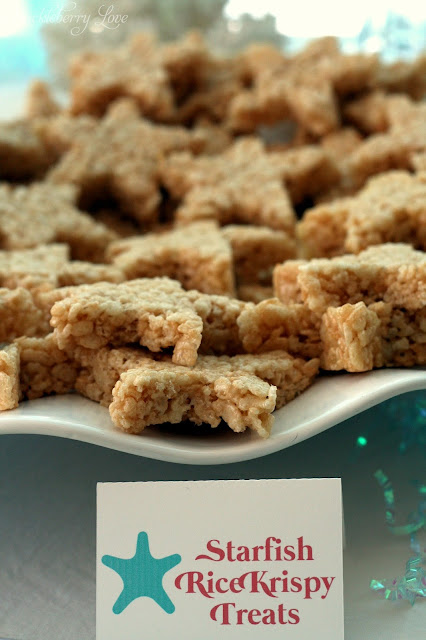 We also made some rice krispy treats using a star cookie cutter. We found the easiest way to do this was to spray the cookie cutter with cooking spray and press the rice krispy mixture into the mold while it was still pliable and then pop it out and let it harden on some wax paper.  We also had fruit salad (Tropical Fruit Salad) and pink lemonade (Mermaid Juice), which I forgot to get pictures. I know...bad blogger, bad! 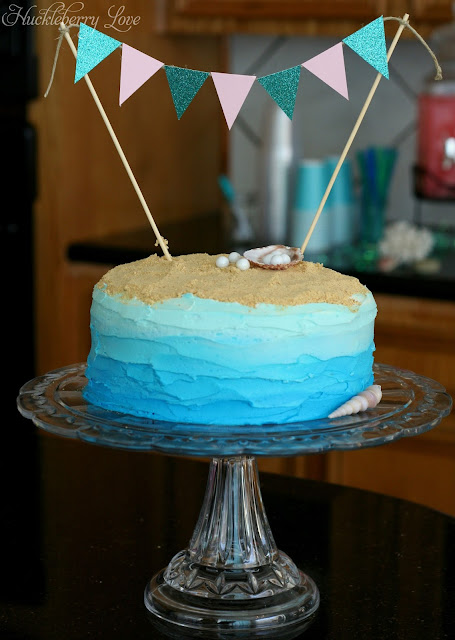 The cake turned out so pretty! My daughter wanted a "pink cake" so I just made a strawberry cake box mix but ended up making the icing. It is from the same recipe that I used for my son's construction themed birthday party cake, but I didn't include the chocolate powder. This recipe icing is sooo good, y'all! I had to physically restrain myself from licking the icing bowl. The beaters never stood a chance. I ended up making a double batch for the three-layered cake it was the perfect amount. 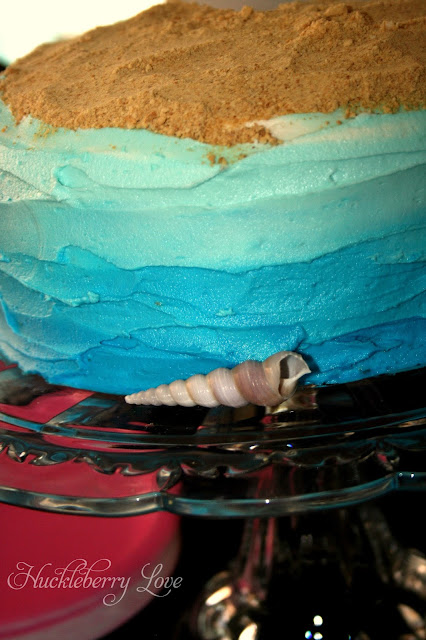 I followed simple instructions from Java Cupcake on how to do the ombre effect and it turned out much cooler than I could have hoped for! It looks just like waves on the beach {well, not Galveston beach...but a beach in Florida, I guess} and my daughter LOVED it! 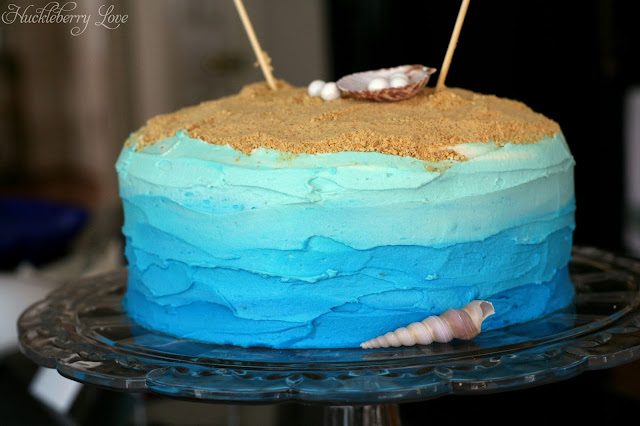 I used some more of the graham cracker crumbs on the top and a few shells, along with some sixlets, to decorate. 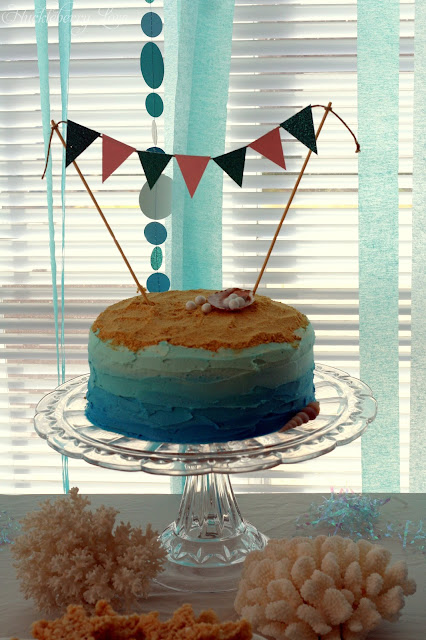 I made a quick little pendant banner for the topper and put some of my corals around the base and it looked perfect! 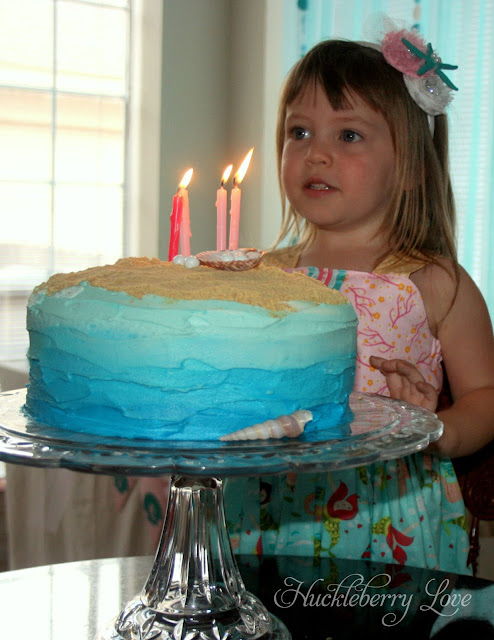 We did take the little banner off for the lighting of the candles. You know, being a fire hazard and all. 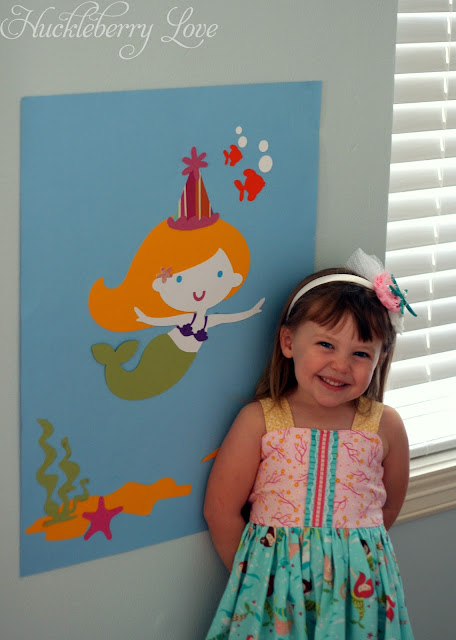 For activities, we initially just planned on having a normal playdate {you know, destroying the playroom} but my daughter really wanted to play a game for her party. So she came up with Pin the Tail on the Mermaid...all by herself! {Future party planner mayhaps?} Using my trusty Silhouette again, I cut out this little mermaid and stuck her on a blue poster board. {I used sticky tack for the green tail you see in the picture. Before we played the game, I removed the tail so the kids could place their own. It just looked too strange to have this mermaid torso floating around with no tail.} 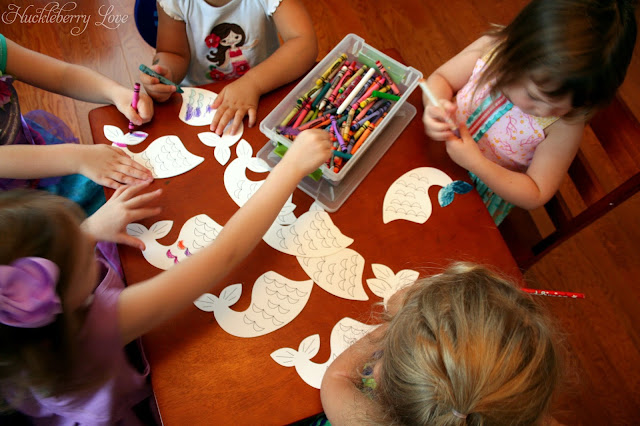 Then, I printed and cut out a bunch of white mermaid tails and let the kids color them... 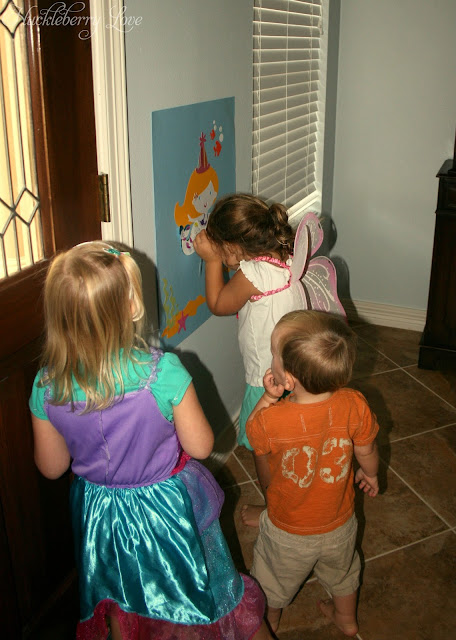 and then stick them on the mermaid. They really enjoyed playing the game and the picture {with everyone's tail still stuck on it} is actually still hanging up in my daughter's room. 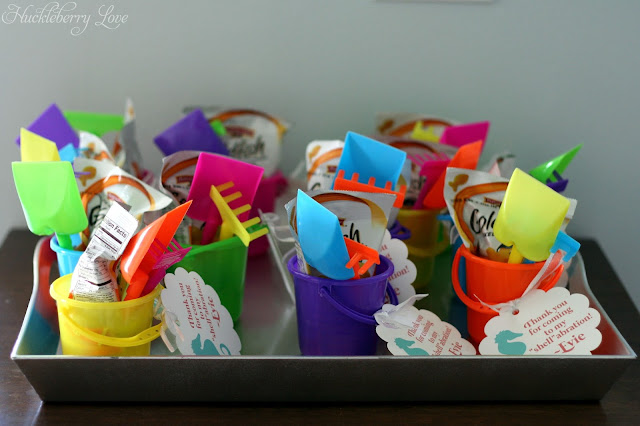 For the favors, I found these little pail sets off Amazon and put a little bag of goldfish inside them. To be honest, I thought they were going to be bigger but I actually like that they are on the small side. My kids use the pails in the bathtub and use the little rake and shovel when playing with play-dough. 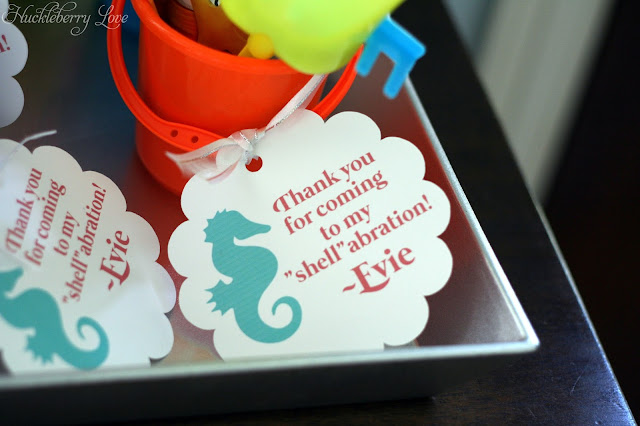 And of course, I had to carry my witty humor onto the thank you tag. 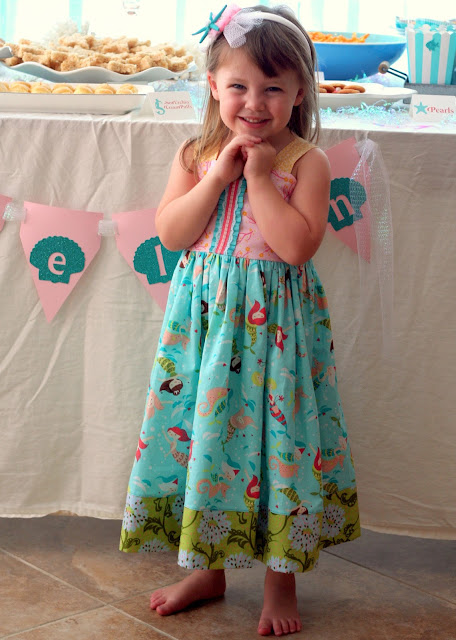 The party ended up being so much fun and I am really glad that I ended up going slightly overboard {pun not intended...this time} with the decor, food and activities. My sweet little girl was so excited with her mermaid party and so happy to have all her friends there to celebrate with her. And, in the end, that's all that matters!

Linking up with these amazing parties:
Reasons to Skip the Housework
Wait Til Your Father Gets Home
A Peek Into My Paradise
The Pin Junkie
The Dedicated House
Posted by Lydia @ Huckleberry Love at 8:00 AM