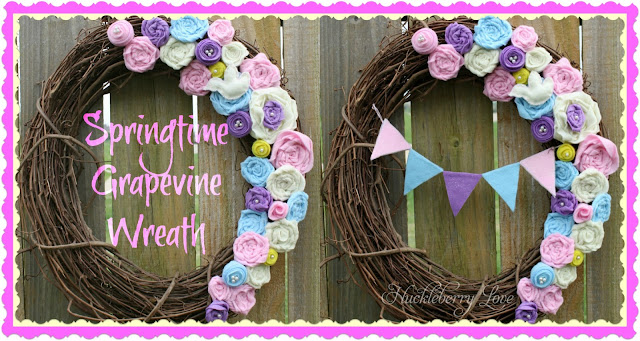 I usually make a wreath for all occasions, but with Easter being so early this year it threw me right off my schedule. I decided that instead of letting my wall go bare I would opt to make a Springtime wreath instead, and to be honest, I'm so glad I did. I am so excited that this beauty can hang for almost 3 months instead of the couple of weeks between St. Patty's Day and Easter. Yippee!!

Whenever I see a good deal, I always seem to buy before I need, so I happened to have this beautiful oval shaped grapevine wreath just sitting there begging for me to come and decorate it. The rest of my materials cost me under $6.00. Beautiful and cheap... starting to sound like pretty woman here.... Anyway, getting a bit off track... here is how it all came together. 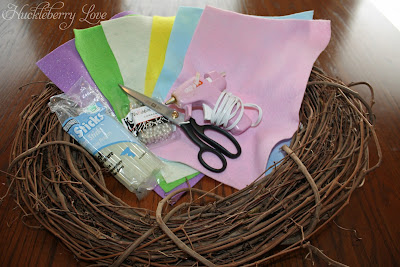 Can't Get Started Without:

~grapevine wreath form
~felt in whatever colours you'd like (to keep it 'springy' I went with pastel pink & blue, purple, cream, and the tiniest bit of yellow)
~hot glue gun and plenty of glue sticks
~crochet thread; embroidery floss or thread would also work
~pearl tipped boutonniere pins (found them in the wedding section at Hobby Lobby)


To get started I began by cutting different sized circles out of my felt. I then cut my circles into a spiral. From there, I just rolled, twisted, and wrapped the felt around itself to make 'rose' like flowers. It is incredibly easy and mindless (hence, watch your favourite show while making these babies).

For a few of the other flowers, instead of rolling my felt, I just wrapped it. It made tight little flowers which were extraordinarily cute once they had a few boutonniere pins stuck in them. I used my husbands wire cutters to trim the excess 'pin' that stuck out the back of the flowers. 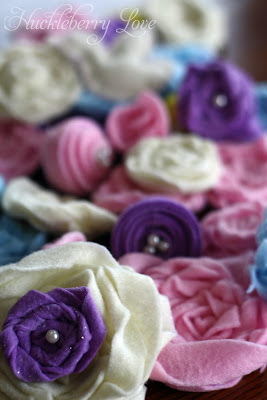 I played around with the idea of adding a bird to my wreath. To me, the first sign of Spring is the orchestra of birds, so I wanted needed a bird on my wreath.
He was very easy to make. I just hand drew my idea of a bird on a piece of felt, cut him out, and then used him as a template to cut another bird identical to him. I then hot glued around most of the edges of the two birds and stuck them together. I left a tiny space where I didn't glue so that I could stuff some fiberfill in him to make him nice and fat. I then finished gluing the rest of the edges. Once he was completely sealed, I hand stitched around the edges with my crochet thread to give him a more finished look. 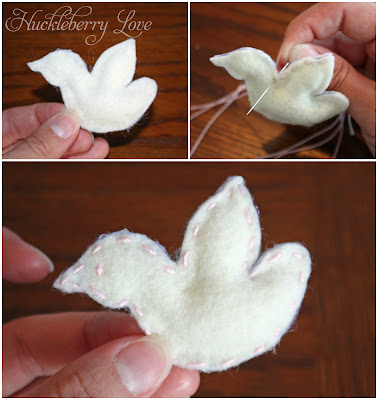 Once my flowers and bird were complete, I laid out all of my flowers on my wreath until I had them all placed where I thought they looked best. 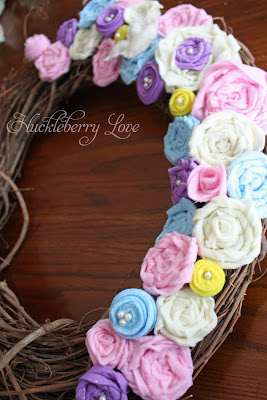 I then glued each flower on, until they were all good and stuck. 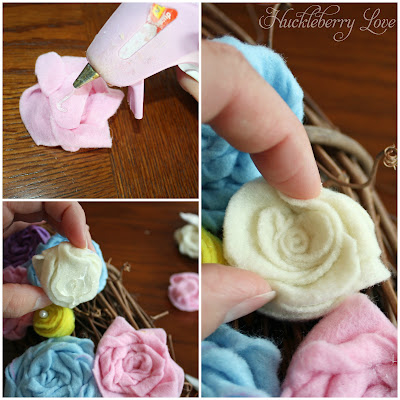 My little bird added just the perfect touch perched up there all proud of himself.
﻿ 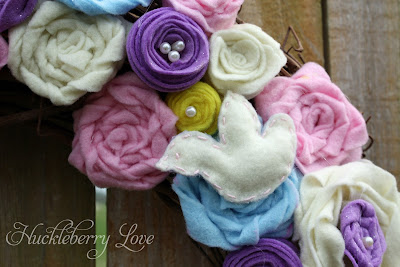 My wreath was then finished, or so I thought... After some deliberation with some of my fellow Huckleberry Love ladies, I decided a little pennant might add just an extra touch of something special. Don't get me wrong, I LOVE this wreath without a pennant, but wanted to see what it would look like with one added. 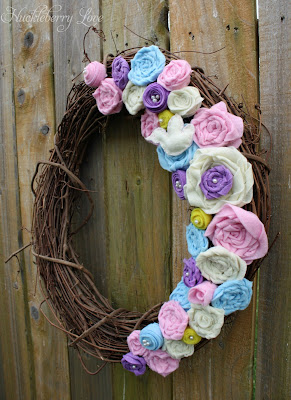 The pennant I created was incredibly easy to make. The first thing I did was cut a piece of crochet thread to the width of my wreath. I then cut out a triangle in my felt and then used it as a template to make a bunch more. Once my triangles were all made I glued the crochet thread along the top of each triangle and then glued another triangle on top of the 'threaded' triangle to sandwich the thread between the two pieces. And, done! :-) 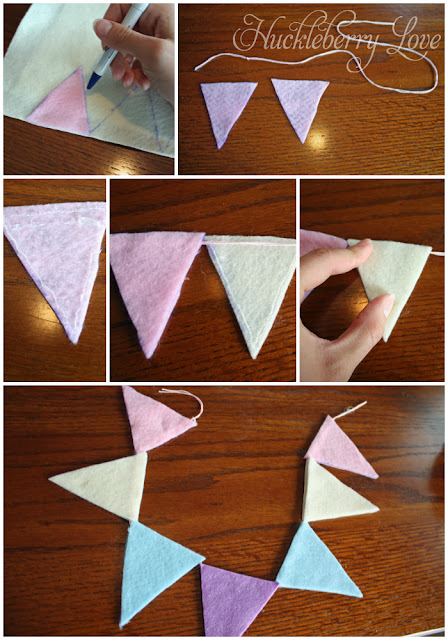 To get my pennant on the wreath I just tied the pennant very loosely onto the wreath. I decided to just tie it on, because I can now either have the pennant on or off depending on my aesthetic mood. 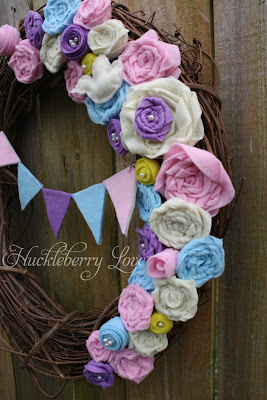 I love this wreath. Definitely my favourite one to date. I think come summer I'm going to have a very hard time taking it down. Because I think it is so beautiful, here are a few more pics to show it off. :-) 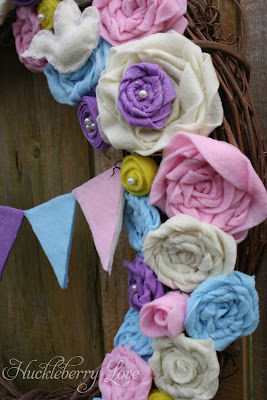 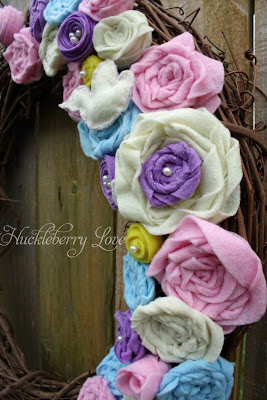 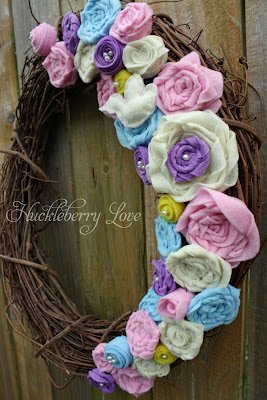 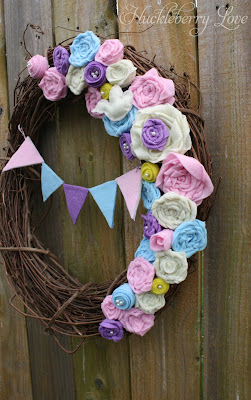 So which do you prefer? With or without the pennant?

Linking Up With These Great Parties:

﻿
Don't forget to join in our new link party, Much Ado About Monday! We would love for you to share your newest recipes, projects, tips and more with us!